I got some additions to my hoard. Most of the time when I visit domestic auction sites and online flea markets there's no interesting hobby stuff available, but every now and then someone sells old stuff from their garage and I might get something nice for a low price. This time I got the first edition of Space Marine, nowadays known as Epic 40k. 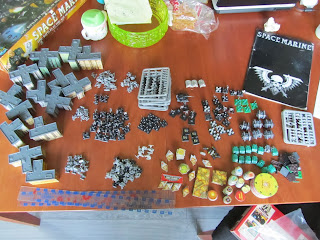 The game has not really been on my shopping list, but the deal I got was cheap on the basis of the seller not knowing whether all bits were present. Well, the box is missing the unit cards and half the Space Marine figures that came with the box, but has a complete Chaos Horde box full of Chaos Space Marines, Chaos Squats, Minotaurs, Beastmen and the like. The Chaos Marines are really good figures so I'm not complaining. 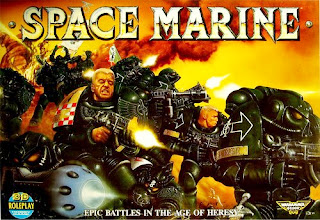 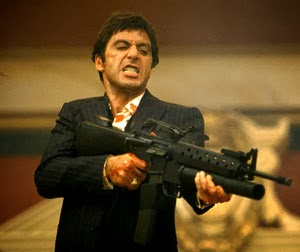 The main reason I got the box was because of the buildings. There's 14 plastic/cardboard 6mm scale urban buildings in the box, and they're generic enough to be used in Battletech Alpha Strike games. I think the Marines and Rhinos can also be used as infantry and infantry transports in Battletech. I'm also thinking of trying to make a simple silicone mold of the roof bits so I can start making my own. I recently bought some mold making and casting stuff to try out. It definitely wasn't cheap, but I think it's a part of our hobby I'd like to learn. 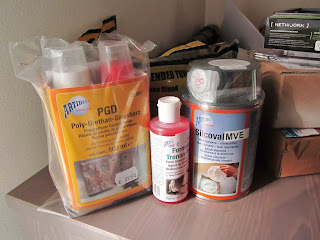 Apart from that, I thought I'd bore you with some holiday snapshots of historical sites I visited this summer!


First off, I got to visit Cagliari in Sardegna again. I visited ancient Karalis in 2012 on a EU project trip and this time I was out there in a research conference presenting my paper. It's a nice old city with just enough to see and do to keep you occupied if your days are mostly filled by sitting in a meeting room. Cagliari is a nice place to just roam the streets and to appreciate the layers upon layers upon layers of history that have been building up there for two or three millenia. And enjoy superlative Italian Ice Cream, of course. 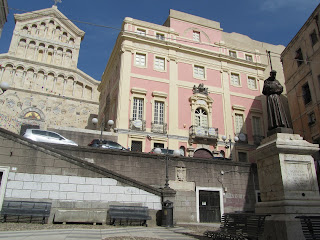 There was a nice archeological museum there highlighting the cultures which have dominated the area. There was evidence of visitors and trade from all over the mediterranean.


The rest of the summer I spent safely within the borders of my native land, but there were a couple of opportunities to soak in some history. My wife got the idea to visit the fortress of  Olavinlinna which is situated here in my home province of Savo. I have only been there once as a child so it was nice to see it again. 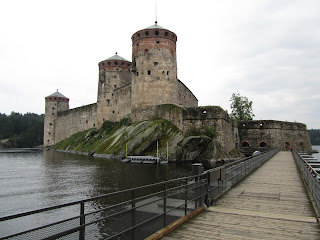 The Finns under Swedish rule began building the fortress in 1475 on the frontier between the Swedish and Russian realms. Well, actually the fort was built way into the land that was claimed by the Russians behind the border of the treaty of Nöteborg which forbade the Swedish and the Russians from building forts on the frontier. The Russians weren't using the land and Finnish settlers were making their way to the area so the fort was built to consolidate Swedish authority in the area. Obviously this didn't sit well with the Russians who saw it as a breach of the treaty (which it in all fairness was) and it served to worsen the relations between the realms for years to come. The fort saw several sieges and was lost to the Russians in 1714 during the Great Northern War. Later on, it became a part of the Autonomous grand duchy of Finland after our whole country was lost to the Russians in 1809 and became a part of independent Finland in 1917. 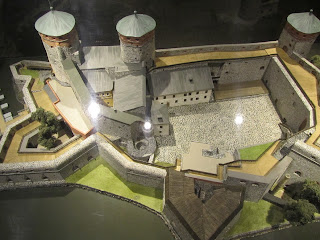 Today the place is a tourist attraction, but I have to say the best thing about the place is the outside. The inside the fort is really bleak and basically just stone tunnels and vaults. Just like a military fortress should be. No pampering of perfumed royalty here.

The town museum happened to host an exhibition of miniatures which my wife agreed to go to with a sigh.

Last, and sadly least, was the fortress off the shores of Helsinki. The fortress is known as "Sveaborg" (fort of Sweden) by the Swedes and "Suomenlinna" (fort of Finland) by the Finns so I'll be diplomatic and use the old Finnish language version of Sveaborg, "Viapori". Viapori was built during Swedish rule against Russia in the 18th century. It was called "the Gibraltar of the North" and is infamous for the blunder of it's commander who surrendered the fort to the Russians in the war of 1808-1809. 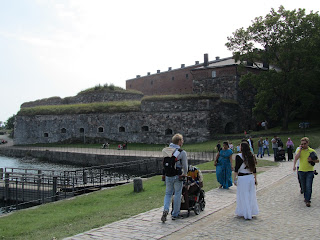 I've been in Viapori often enough, but this time the fortress was not the attraction I was there to see. The shipyard in the fort has been working on a gun boat built using 18th century schematics. These boats were used extensively on the shallow island network off the coast of Finland during the Russo-Swedish war of 1808-1809 and I was interested in seeing it as I heard that it was complete and on display. Sadly, the rumours were not true. Apparently they had set the finished hull in the water and paraded it before finishing the sails or anything, and hidden the boat after that. All I got to see was a bit of the hull visible under a tarp in the old drydock of the fortress.

This sight wasn't worth the trip especially as I had to push my sleeping son on some of the bumpiest cobblestones ever through the streets of the fort to get there. So that's why it ended up being the least of the trips this summer. Anyway, I hope to see it finished one day.

A Hail Caesar division worth of Hoplite Greek done. 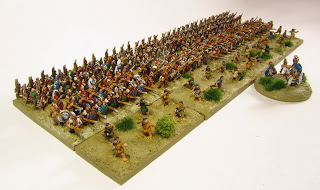 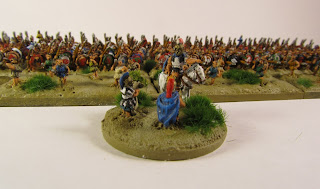 The back row hoplites are the same I showed you earlier but the "attacking" hoplites, the psiloi and the general are new. I actually did four additional stands of psiloi at the same time but it's just more of the same and they'll get their chance to have their photo taken after I finish the next batch.

For Hail Caesar, this set is enough for four standard units of hoplites, two small skirmisher units and a commander to lead them. Once I triple this I'll have quite a nice army to fight with. For Warmaster Ancients the situation is a bit worse as this is enough for just two and a half units of Hoplites and one of Skirmishers and I think I'd need 8-10 units of Hoplites at least. Anyway, it's a start.
Posted by Mikko Asikainen at 10:17 PM 2 comments:

As the average wargamer often sports some grey hair in addition to a well earned beer belly, I suppose many of you have been where I am right now. Taking care of a small child seems to take a lot out of my hobby time budget. That's why getting to play on two days of the week when it's not a convention week seems like a rarity and a treat. On the other hand, I'm in a very nice place in my life right now as I have taken four and a half months off work to take care of my heir and give my wife a chance to return to her career a few months early. It definitely is a nice change of routine and I get to paint some figures during naptime if the house is in order (which it is not as I write this).


The first game of this week was even more rare as I got to play a game of Advanced Squad Leader for the first time in little less than a year. ASL is one of those games that gets a pitiful amount of play compared to the amount of modules and expansions I have stockpiled. The phonebook sized rulebook just keeps scaring away any potential opponent recruits.

Anyway, we played PB4 - Killean's red from the Pegasus Bridge module. In the scenario, the Brits have taken the bridge and are sweeping a village nearby to get rid of some pesky snipers. The Germans get good sniper activation rolls but their troop quality isn't anywhere close to the British paratroopers. I'll just post a couple of pictures from the game to give anyone interested an idea on how it went.

The scenario went a bit too well for the British, and I checked the stats from ROAR where people can record their plays. The British have won roughly double the amount of games compared to the Germans in this scenario. It's definitely imbalanced though not impossible for the Germans. No Victoria Crosses for me for this easy win.

The second game of the week was a game of Hail Caesar. As you might have noticed I finally kicked off my Greek project. My opponent is also busy doing some Carthaginians, so I suppose we have some common ground to fight over in Sicily. We don't have that many troops completed and played just a small game with some empty stands and the few figures we had so I didn't bother with more than one photo. I used the Hoplite Greek list and my opponent used Early Carthaginian with a couple of Elephants thrown in for fun. 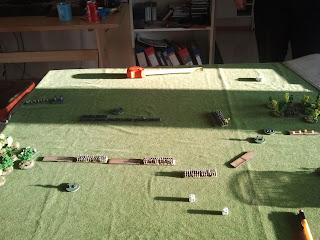 The match went pretty smoothly and since it's my second game of Hail Caesar, we got the rules running pretty quickly. I think the rules suit demo gaming pretty well as they seemed quite easy to teach, especially to someone familiar with Warhammer Fantasy.

The dynamics and the pacing of the game oddly enough remind me of Commands&Colors. It is improbable that a divisional commander is able to activate all his troops in a single turn and the turn might sometimes pass without the division doing anything. This leads to the situation where the general must prioritize which units he wants to move and try to keep a coherent line going knowing he'll probably fail a command check before everyone moves. This reminds me of C&C in the way that the battle sometimes develops quickly on one section of the field and remains static in another. The player can take care to try and even out the successful activations in the line but this can lead to losing the initiative in another portion of the field. The Move/Countermove dynamic of C&C seems to be present here. It will definitely drive players used to having full control nuts. For me, it's ok. I just have to adjust my tactics accordingly.


In the match, the superiority of the Hoplite heavy infantry versus the African medium infantry was clear. For our next match I think I'll switch to the proper Syracusan list to even things out a bit. That list has worse hoplites and a chance to field some barbarian mercenaries. Don't be fooled into thinking the Hail Caesar lists are balanced for competitive play as they are not. You need to work together with your opponents to get enjoyable games.
Posted by Mikko Asikainen at 10:47 PM No comments: