A few years ago before my grandmother died I was entrusted with an old family bible she had. It had originally belonged to my great-grandfather and since I am the only history junkie in the family, she decided the book should go to me. Anyway, looking at the events recorded on it, I noticed something interesting:

What's interesting about the date is that on spring 1918 Finland, which had just gained independence from Russia, was engaged in a bloody civil war. It's a pitch black stain on our history with atrocities, concentration camps, ethnic cleansing and all that. You can read about it here, but suffice to say it was a war between the "whites" led by the German backed bourgeuoisie hoping to build a republic against the "reds" consisting of Russian backed working class looking to form a socialist government and join the Soviet Union. It ended up going very badly for the reds, but let's focus on my great-great uncle.

There was no oral tradition passed on to me on whether he died in the war or not, but there's a pretty good digital archive on the people who died in the war of 1918. I put a search for Lejanter in there and found a record of him! He had fought for the whites and had died at the Battle of Viipuri a day before the reds surrendered the city. I asked my grandmother about it and she confirmed that Lejanter had fought in the war and added some spice saying that he was killed by a girl from his own village. So there was some family history passed down after all, but my family aren't exactly chatterboxes when it comes to our part in wars.

I let the matter rest and some time later my grandmother died, taking the rest of the unspoken history of our family to the grave.

This week, remembering the centennial, I started to write this blog post with the intention of speaking about the importance of passing on family history and how little there is to know about this man who died a century ago. And then I bumped into a treasure. I was reading on how the information on the database I found Lejanter's record from was built and noticed a lot of it had originated from one book: "Sankarien muisto" by a Henrik Johannes Boström. In the 1920's, Boström had recognized the need to collate names and stories of the whites who had died in the war and spent years writing to the relatives of the deceased asking for information to put in the book, published in 1927. Feeling lucky, I procured a copy and lucky I was! 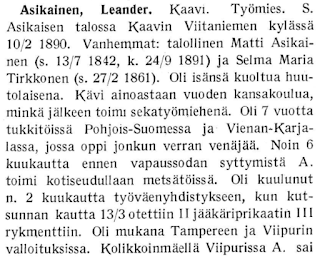 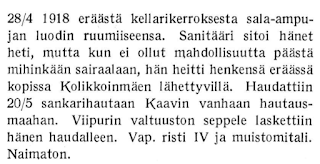 Asikainen, Leander. Kaavi. Labourer. Born in the house of Asikainen in the village of Viitaniemi, Kaavi in 10/2 1890. Parents: farmer Matti Asikainen (b. 13/7 1842, d. 24/9 1891) and Selma Maria Tirkkonen (b. 27/2 1861). Was an auction child after the death of his father. Went to school for only one year, after which worked as a mixed labourer. Worked for seven years as a logger in northern Finland and Karelia, where learned a bit of Russian. Approximately 6 months before the war of liberation he worked the forests near his home territory. Had been a member of the workers union for two months when he was drafted into the white guard and stationed into the 3rd regiment of the 2nd Jäger regiment. Participated in the battles of Tampere and Viipuri. During the Battle of Viipuri  on 28/4 1918 at Kolikkoinmäki, Asikainen was shot by a sniper from a basement. The sanitary bound his wound immediately but as there was no chance to get to a hospital, he gave his life in a shed near Kolikkoinmäki. Was buried on 20/5 to a memorial grave at the old cemetery in Kaavi. A wreath from the council of Viipuri was laid on his grave. Awarded a Freedom cross, class 4 and a memorial medal. Unmarried.

I definitely didn't expect to find such a detailed account on his life, much less such an interesting one! The story paints a vivid picture of his life and opens up plenty of questions about my family's past. Obviously the family fell on hard times after the death of Matti Asikainen if Leander was sold at a child auction. It was a primitive form of social care back in the day. People would bid at an auction to take a child into foster care and the one who would bid the lowest, would receive that sum from the government and agree to take care of the child. Leander's mother was still alive and no mother would give away her child unless times were truly tough. Leander would grow up to be a possibly illiterate man working as a lumberjack. He was drafted into the white guard and I doubt he went into war with a burning sense of duty and a love for his country. After all, he had more in common with the working class red guard than the well educated, high classed jägers giving him orders. The battle for Tampere began right after he was drafted and he is said to have taken part, so I guess they threw him in without any training, too. With his worker's union background and Russian speaking skills, he might have seemed suspicious in the ranks of the whites as well.

Leander didn't have any luck in his life. He died on the last day of fighting in Viipuri a hundred years ago. Had he survived the attack on Kolikkoinmäki, he would have survived the war. After the reds surrendered in Viipuri on the 29th, there was only mopping up to do. What a waste.


Posted by Mikko Asikainen at 8:24 AM No comments:

Some 6mm tanks for the Eastern Front 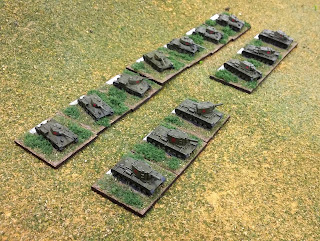 Not much to say about these except they're effortless to paint and should yield a nice game at some point.
Posted by Mikko Asikainen at 8:57 PM 2 comments:

I was supposed to start painting something else than orcs for a change but I had old Grotfang here already basecoated so what can I do? 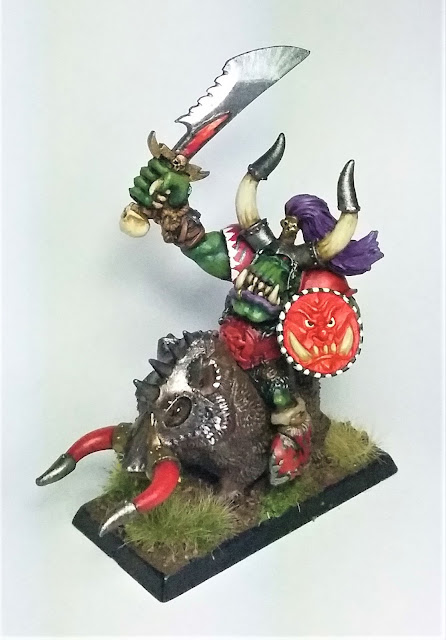 This model was the general of my first wargaming army in the late 90's so it's the second time I painted him. I do hope there's been some development in my painting! I tried a new skintone on him to get a break from the Goblin Green monotony I've devolved into. This time around I did a base of citadel foundation orkhide shade and built that up to Vallejo Camo Green and I'm pretty happy with it. The shield is not original to the model but I found it in my bits box and thought it gives Grotfang a nice, oldhammery feel.
Posted by Mikko Asikainen at 9:18 AM 1 comment: