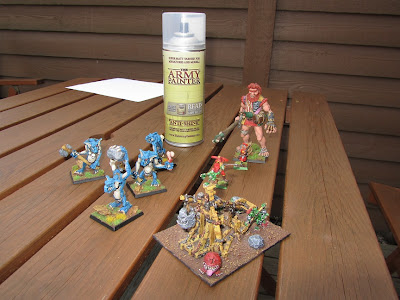 I've had a can of Army Painter's matt varnish spray for a while now. I've heard some mixed reports on it's effects, particularly on it's habit of fogging up your figures. I've also heard that most of these problems can be avoided by using the spray only on a warm, dry day. Not many of those during the winter months here in Finland. Anyway, summer is finally here and the weather was just right so I took the opportunity to try out the spray on some shining examples of my figures.

So, I shook the can vigorously for at least a minute, which was advised in the can and got to work. At first, being a careful guy, I tried the product on some figures painted by my wife. I mean.. they were figures which ended up being really glossy so these would be perfect candidates to be "saved" by the matte spray! 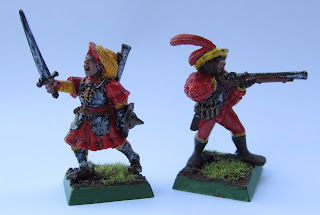 So, here's a pic of two of the figures in daylight. You can see the gloss especially on the skirt of the swordsman. That gloss would be a great effect for blood, but not so much for clothing. 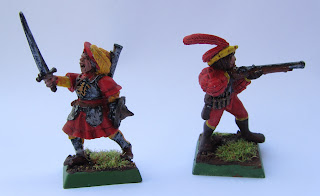 Here's what it ended up looking like after a few puffs from the can. The gloss is all but gone, and the new matte finish is a nice improvement on the figures. Now, using this product on figures with basing materials already in there is not recommended as it will easily fog up static grass strands and whatnot. However, if you are careful, you can use this to touch up your old projects. You chave to be really careful though. I wasn't and overdid the spray on these two, giving the grass  a noticeable fogging: 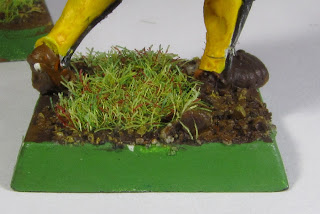 Well, it's a little more noticeable in nature, but not terrible. You have to scrutinize the grass closely to see it, but it's there. The varnish also picks up any stray hairs or dust on your figures.

Next, I did a little 6mm testing. The first confederates I did for my ACW projects were washed with the old GW washes, before the days of Devlan Mud. That's why they ended up looking quite glossy. It's not that noticeable in the picture, but it definitely shows when you look at the live:

Now, here's a different unit, painted in the same way but now given just a couple of light puffs of that anti-shine. The shine is much less noticeable now, and the matte finish is pleasing to the eye. Perhaps the difference isn't as dramatic than with 28mm though.

Washing your 6mm stuff with Devlan Mud gives you a much more consistent finish and a nice matte effect without anti-shine. Here's a unit of Union zouaves I've washed using Devlan Mud:

Ok, one more comparison. I painted my space hulk marines more than a year ago, but haven't taken any pics for you partially because of the excessive gloss showing on camera. Here's a pic I took originally for my "I've got a new camera!" -post, but didn't post: 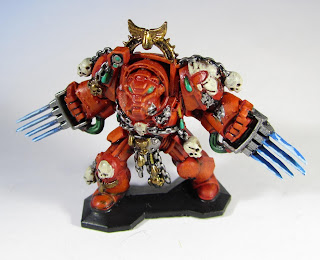 Nasty! Now, here's the same figure with just a bit of anti-shine: 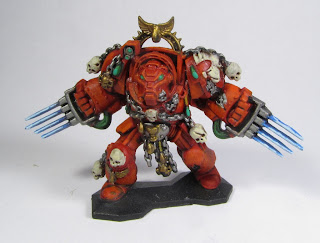 There's still some shiny spots as I was maybe too careful with the spray, but the overall effect is much more camera-friendly. Now, I just need to find some spray which fixes my crappy painting..
Posted by Mikko Asikainen at 5:31 PM No comments: