The Russians marched into Finland organized into three divisions on the 21st of February, 1808. There were three main lines of attack into Finland. The Russian 17th division would march along the coastline and secure Southern Finland, the 21st division would cut through Finland, securing the Häme (Tavastehus) province and the city of Tampere before heading north towards Vaasa and ultimately Oulu. The 5th division would march through the Savonian province, being thus able to threaten the rear of any Finnish forces in western Finland. I think a map would be in order at this point but I couldn't find one that I would be confident copying here. Google it ;)

The Finnish forces were too few and too scattered to oppose the Russians effectively so the plan was for the army to retreat north to Oulu to regroup and wait for reinforcements from Sweden. The army was organized into four brigades and it was to fight only delaying actions on the way north and this would be the case throughout the spring. The Russian fifth division fought skirmishes against the Savolax Brigade (we've already played the battle of Leppävirta) and there were several minor skirmishes in western Finland.

On the 16th of April, the Finns from Häme and Uusimaa (Nyland) regiments fought the Russians on two occasions about one hundred kilometers south of Oulu. First a fighting withdraval at Yppäri and then at Viirre. The second battle is the topic of our refight.

Historically, the Russian vanguard, led by the very able Russian cavalry commander Jakov Kulnev,  was spread out pretty thin already and had already fought an engagement that day. The Häme and Uusimaa regiments took position on a ridge overlooking a frozen riverbank, determined to stop them. Another brigade would attempt to flank the Russian by marching south on the frozen sea. The Finns fought successfully and the battle could have become the first proper victory in the war for the Finns. Alas, the Swedish CinC, Klingspor was adamant on keeping to his plan and ordered the Finns commanded by Gripenberg to retreat.

The scenario is from the "1808 The Last Summer" scenario book by Sword and Sabre publishing, the rules are General De Brigade 2nd ed. and the figures are 6mm Heroics and Ros. Commentary in the pictures. 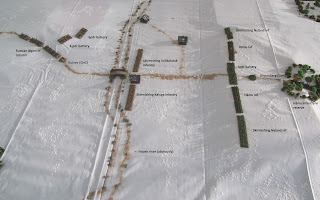 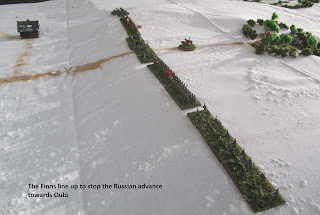 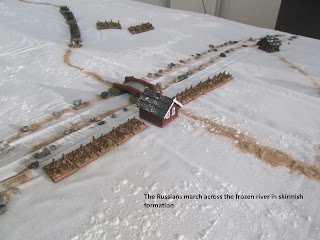 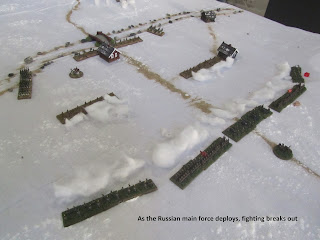 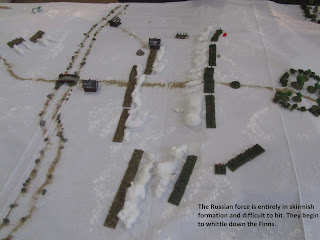 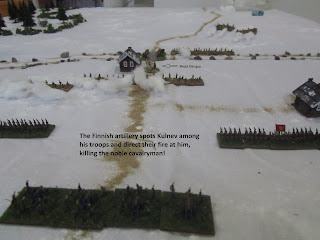 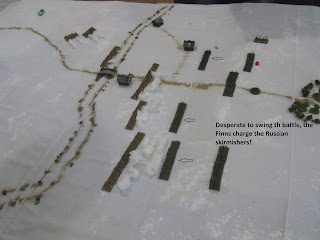 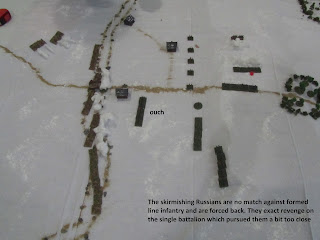 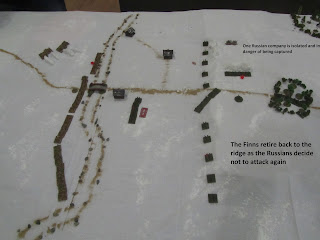 In the end, the Finns lost about 400 men with the Häme Rustholli battalion taking the worst beating. The Russians lost only 200 men but were forced back and counted general Kulnev among the dead. If we assume that maybe a third of GdB losses are actual killed an wounded men, the result was pretty close to history.

We gave large skirmishing units too good bonuses for their formation in this game, causing the Russians to be able to shoot at the Finns with impunity. The full skirmish modifiers should apply only to small, rather insubstantial skirmish units, not to whole battalions using jäger tactics. Skirmishing was widespread in the Finnish war and it was common for whole battles to take place between whole regiments in skirmish order. This is why we have to tone down the benefits a bit for the next game.

All in all, this was quite a straightforward game and took us maybe two hours to play.