I was supposed to write my anniversary battle report for Antietam yesterday already but I had a chance to play some Musket & Pike instead. I'm sure you understand. Note that there are a lot of pictures in this entry, probably more than you care to see :)

We played our Antietam game last weekend using the brigade Fire and Fury rules. The scenario for the northern part of the battlefield was much, much too big for our combined collections, but the afternoon battle south of Sharpsburg was much more manageable and posed an interesting scenario. In the scenario, Burnside's corps, having been stuck at the soon-to-be-named Burnside's bridge for a good while have finally gotten across and are advancing towards Sharpsburg. It is late in the day, but the Confederate defences are weak there. If successful, Burnside would threaten Lee's line of retreat. They don't know however, that A.P Hill's light division is on it's way from Harper's Ferry to reinforce the defenders.

I won't bore you with a detailed story, but rather put some comments on the pictures. It's not like any of us actually read the text in long battle reports, right? 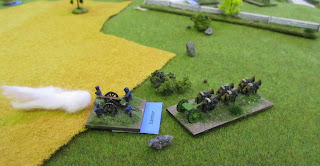 The scenario started very well for the Union. Their advance was so effortless in fact, that concern was raised over the fairness of the scenario. It wasn't difficult to silence the Confederate guns on the Union right and roll them over with infantry. This made reaching Sharpsburg much easier. Upon reaching Sharpsburg the rest of the Union brigades were released, giving the Union double the troops compared to the Confederates. Most of the Union brigades were green though, and were reduced form Fresh to Worn status by the first losses, a big thing in Fire and Fury. The Confederates fought like hell and I haven't seen quite so many 10's rolled before, but in the end the outnumber factor proved too much for the Confederates to handle. They held Sharpsburg in the end and both sides had suffered roughly equal losses, but the Confederate flank had been turned. Lee would have a hard time retreating unless the cautious McClellan would order Burnside to retreat back behind Antietam creek during the night, convinced there's 100 000 more rebels hiding in the bushes. If not, maybe McClellan's wife would really get something to brag about.

Posted by Mikko Asikainen at 7:15 PM