When I first saw the intro movie for Mechwarrior 2 I was sold on mech-on-mech action:
There's a lot to like in Battletech. Too bad I don't like the rules of the boardgame all that much. I have a set for the third edition of the game with a pile of battlemechs, but I've only played Battletech once. The game takes a long time to play and is heavy with bookkeeping true to 80's game design. I've been looking for a good set of rules for fighting mechs and surprisingly found some under the umbrella of the Battletech rules themeselves.
Battletech Quick-Strike is a lite-version of the Battletech rules meant to be used in large battles and campaigns where the players do not wish to bog down gameplay with the cumbersome rules of the full set. As it happens, the rules offer a chance to play a fast-paced, light game of mech warfare.
The rules are included in the Strategic Operations expansion of Battletech. You can obtain a digital copy pretty cheap from here. Quick-Strike contains all the basic elements you would expect from a battlemech game. The players dice for initiative, with the initiative loser moving the first mech. The players (or sides) alternate in moving mechs until each one has moved. After this, fire attacks are handled simultaneously. Players roll to hit after applying a few modifiers. Shots that hit score a default amount of damage depending on the range of the attack and the type of the mech. Mechs have a single armor score and an internal structure score. After the armor has been depleted and mechs suffer damage to internal structure, they take critical damage and suffer penalties to movement, shooting etc. Once the internal structure runs out, the mech is destroyed.
Mechs can shoot indirect fire with the help of a spotter, deal extra damage with heat penalties, use jump jets to fly through the air, beat each other senseless in melee and all the usual stuff you're used to. Everything has just been simplified and abstracted to about ten pages or so. Each mech has a roster card with all the info required. The system also supports infantry, armor and aircraft.
I plan on using these rules to lure people who normally don't play miniatures games to have a go. I played a couple of matches last night. One with a friend and another with my wife. The rules are easy enough for casual players to learn and is a fun and fast beer and pretzels type of game. Recommended. 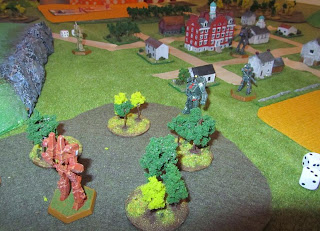 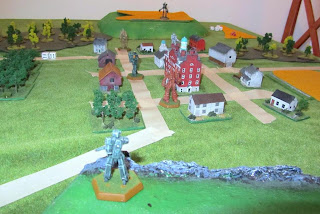 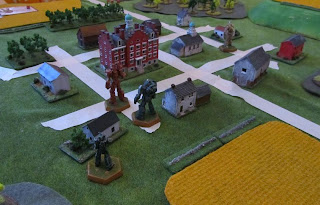 Posted by Mikko Asikainen at 6:52 PM